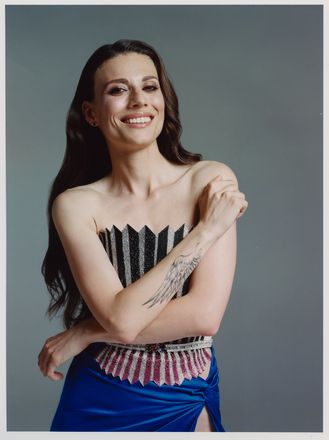 Viktoriia Kravchenko is an officer of the Armed Forces of Ukraine, a military psychologist, an adjunct of postgraduate studies. We spoke with her a few days before her next trip to the front - where she saves the souls of our soldiers. While studying at graduate school, the future doctor of philosophy in the field of psychological science researches the psychological factors of the formation of gender competence of future officers, and although scientific work officially exempts her from work at the front lines and in the rear, Victoria chooses to work as a military psychologist and help where her knowledge and skills are now the most necessary.

My father is a military man, so I moved around most of my life. I was born in Germany, then we moved to Odesa, and when I turned 8 - to Kyiv. Here I entered the Military Institute of Kyiv National Shevchenko University, that is, since 2008 I have been in the ranks of the Armed Forces of Ukraine – first as a cadet, then receiving my first officer rank in 2013. I’ve always admired my father and grandfather, who served in aviation - for me, they were examples of how military personnel should act and think. I even dreamed of becoming a pilot, and served for a while in the Air Force of the Ukrainian Armed Forces. But in the end, I became a military psychologist.

About her work during the war

Now my job is to observe the moral and psychological state of the servicemen of the unit, to prevent various negative consequences of mental trauma, as well as to work with post-traumatic stress disorders. And what is relevant now is the return to formation after combat clashes. A lot of the work is one-on-one because people need to let their emotions out, so we teach them how to act during combat stress, how to help themselves, what psychological first aid is, and how to help their comrades who may just freeze or experience tantrums and other negative mental reactions. Very often our fighters, so strong and tenacious, are afraid to share their experiences, because they consider it a weakness. They may themselves understand that they need the help of a psychologist, but no one has ever explained to them how vital it is to express feelings and that in fact, on the contrary, strength and courage are needed to take that step. What they are experiencing and what they have experienced, what reactions they have after these events now and what will appear later, this is a normal reaction of their psyche to abnormal circumstances. Fortunately, the vast majority of those who are currently protecting our country with their lives understand the importance of psychologists, because they are sitting in the trenches now, and it is already a blessing for them if some other person approaches them just to talk. It is important for them to feel needed and not abandoned. I have not yet met a single person who would refuse psychological help and a simple conversation with me. Even most skeptical ones agree. Each person needs their own approach, and thank God I managed to find it for each one, work through the situation and make some impact. 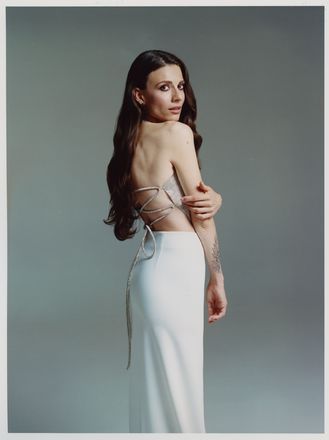 About beauty and appearance

The most important thing is the beauty of the soul, the ability to stay humane. There are people who are beautiful, visually beautiful, but when you look into their eyes - there is nothing there. There are people who are not perfect from the outside, according to some conventional standards, but there is so much beauty in their eyes, so much energy and inspiration. This is what beauty means for me, it blooms from the inside, and it can be seen in the eyes. As for external attributes - as you may have noticed, I wear jewelry, but these are my amulets. These were a gift from the mother of a boy who wished to meet real soldiers, and he was so happy when we gave him our chevrons. His mom brings jewelry from Bali and gave me these as a present – and since then these are my lucky charms. We got under fire, we went through a lot, but I believe that these amulets protect me.

Regarding the beauty around - when I was in the East of Ukraine for the first time, I realised how dangerous it was there, and then returned to the city where people live a more peaceful and calm life in comparison – that made me angry. It seemed to me that those who were going for walks and resting have forgotten about the war, and my first reaction was aggressive. It seemed to me that everyone who was there on the front lines, giving their lives to defend us, that they were abandoned. But then I saw how many people are ready and willing to help, and anger turned into gratitude. A conversation with my husband, who volunteered for the war as he has a lot of military experience, helped a lot too. He said that it is necessary to look at it from a different point of view, because it is good that these people have the opportunity to live. Yes, the war goes on, but so does life, and everyone has their ways to help. From the outside, a person may seem indifferent to war, but in reality they can be doing incredible things. You never know for sure.

To be honest, even before full-scale war, I did not have time for any particular self-care routines. But in the first weeks, when I didn't even have time to take a shower, it was a thrill for me to just wash my hair. I ran out of skincare products just before the invasion. And then, 2 weeks later I found a body lotion, unfamiliar to me, some hair oil and face cream, it just made me so happy. Such little things, but they meant so much at the time.

About military men and women

Those women who are at the front lines are of such a kind that can give a head start even to some men. In general, women are sometimes even more aggressive than men in war. According to my observations, women tolerate stress way easier, it seems to me that maternal instinct plays a role here, because when a woman is in a unit, the team will be 100% in order. Of course, everything is very individual, but mainly teams with women have a better mood and a friendlier atmosphere. Because men still need women's attention, and it's not about intimacy, it's about the fact that a woman inspires them, it's a manifestation of a mother, a daughter, it's just something to remind them about the life they are fighting for, the world back home.

I realized that something was going to happen on February 19 - then my husband said that I needed to take my son to the West of Ukraine, to his parents. I didn't argue, but I cried the whole time we were driving there. And on February 24, I woke up because of a phone call from Kharkiv, from my father. I heard explosions in the background. It was the scariest day of my life. Usually, in stressful situations, I accumulate, act, and then experience it emotionally, but for the first time in my life, I immediately began to shake very strongly, and I understood that this is how stress comes out through the body. While I was waiting for my friend to go to the place of our service together, I cleaned the whole apartment, releasing stress this way, through physical activity. That day I said goodbye to my husband and went to work. It was scary, most of all I was afraid for my father, but at least I was calm for my son as he was in a safe place.

The first two weeks of the full-scale offensive were terrible, also because my father was constantly under fire in Kharkiv. I stayed awake and constantly monitored the news. When I read that the place where he was serving was hit, I thought my heart would stop. We had an agreement to text each other every two hours - at least some emoji. He holds a management position in the army and is responsible for a very large number of personnel, so he did not have much time to exchange long text messages. After the news about the missile strike, I wrote to him and the 15 minutes that passed before he answered were the longest in my life. I no longer hoped to even hug him alive. When he arrived in Kyiv, I rushed to hug him, which was uncomfortable because of his bulletproof vest. I cried a lot then. It was one of the most important days for me.

I see light in the moments with loved ones, in the eyes of the people I help. When you see the result of your work, at such moments you understand what exactly you are doing in this war. You do not destroy, but on the contrary you rebuild, or at least you do not allow the destruction of the psyche. For me, the greatest reward is the relief in the eyes of the military after the conversation. Sometimes I just see their eyes, because mostly that kind of people you have to work with individually, they don't look you into the eyes, they look down or they close them instead. But at the end of our meeting, they are able to look straight, I see their eyes, I see that they are grateful, and the highest reward for me is their smile. When you see such a person for the first time, it seems that they won’t be able to smile anymore. And then suddenly, after the conversation, you see their smile. It immediately makes you feel better.